A BIT OF HISTORY

The first appearances of the engine in heavy oil that can be considered as the precursor of the semi-diesel are, seems, slightly earlier in the 20th century, around 1890, at the time where the German DIESEL engineer was developing his machine combustion internal.

The origin is attributed to attempts to use of kerosene. This fuel, which is cheaper, certainly, but less volatile than gasoline, required significantly different spray and ignition systems then used in gasoline engines carburetor and ignition system.

Maximilien RINGELMANN, Professor authoritative for agricultural mechanization, distinguished in 1900 three categories of internal combustion engine may be able to use heavy fuel:

-the engines where fuel was introduced into the cylinder, mixed intimately in all the air necessary for combustion as in the engines of our days;

-motors in which they introduced the fuel with only a part of the combustion air. These engines were already a hot ball (uncooled part) in contact with which the fuel finished vaporize while continued the filling of fresh air;

-Finally, the engine where air and fuel were introduced in the cylinder in a manner separated. The latter functioned according to the four-stroke cycle, but there were also a spray connected to the cylinder by a narrow channel that wasn't reminiscent, at least in its layout, the 'hot head' still used in the mid-1950s semi-diesel engines. It is somewhat before 1920 that appears an engine operating according to this last principle, but in two-stroke cycle, crankcase acting as filler in fresh air pump.

Only the last two categories were suitable for the heavy fuel market. Meanwhile, at the turn of the century, had appeared precisely Rudolph DIESEL engines, but due to their large size and their due weight to the required high compression ratio for spontaneous, they could not be used to fixed position or, at best, on larger vessels.

However, the fishermen needed a lighter engine and easy maintenance. It is as it came to build two-stroke low compression engines which differentiated diesel engines by the presence of a cylinder head heated to high temperature whose role was to ensure the spray and the ignition of the fuel-air mixture at the end of the admission phase.

Many achievements equipped the fishing boats and, circa 1921, their scope was extended to agricultural tractors engines. The first to know a great commercial success was the "BULLDOG" engine built by the German LANZ in 1921. But the formula was repeated throughout Europe.

By BOLINDERS in Sweden, LANDINI, BREDA and BUBBA in Italy, HSCS (the tough) in Hungary, and RENAULT, the Société française de Vierzon from 1930.
Stationary engines household cycle-based two-stroke hot-bulb-ignition diesel were built at the beginning of the 20th century well before the arrival of the first tractor Lanz. 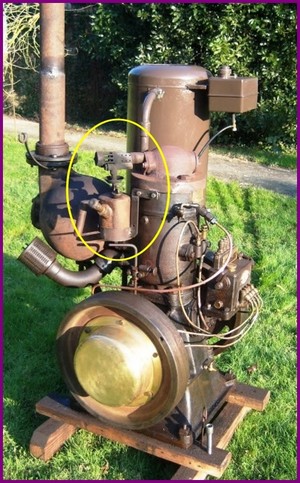 Above, the SAMCI engine, with a power of 7-9 horses, has an essence of Preheat lamp and the appliance of lubrication provided by the Ets Martin brothers and Ciboit, at Levallois.
It can be seen that the first gasoline heaters that we collect were used for engines for domestic use before, from 1921, used for engine semi-diesel tractors.

So, we will complete this chapter by deriving to these machines that have replaced the oxen ploughs and that fascinate many followers four-wheeled.

What made the international fame of the Lanz company, it is the peculiarity of its engine, and in particular, very specific and innovative illumination for the time: hot-bulb system used for semi-diesel engines.

That is what the ball hot?

Start hot-bulb system is so called because of its shape: all tractors powered the engine semi-diesel two-stroke hot-bulb have in front a protuberance of spherical shape.

It is very thick, generally steel nickel and fixed on the cylinder head, front of the injector. Non-cooled the hot ball has a temperature between 500 ° C and 600 ° C continuously maintained by the engine's combustion.

Also called "cap", it is other than the visible part of the bolt which is cooled by rooms to water. 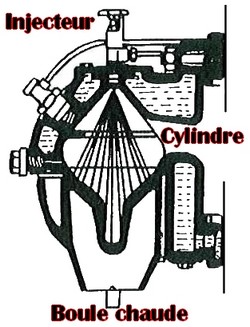 Once heated with a heating lamp, it is the fuel in this ball that allows the start of the tractor. In contact with the hot ball, fuel undergoes chemical changes that allow then to ignite spontaneously despite the low compression ratio of the engine.

What is a semi-diesel engine?

The semi-diesel engine is a 2 time to low compression ratio, in need of a hot spot for its explosion.
Once the ball is heated, it allows the marketing of a very simple single cylinder engine which produced a good power-to-weight ratio, low consumption and which can function with variable loads. It accepts different types of fuels, even the least expensive ones, which makes it so profitable (for each type of fuel is a type of ball).

After much heated the ball in front of the Lanz, startup is done through the steering wheel. Need to engage on the side of the machine and turn to create the explosion and cause to start. This type of tractor rarely broke down.

Even if the system hot-bulb and start system on the side (steering wheel) was a real revolution at that time, it should be noted that accidents occurred frequently. They were mainly due to the difficulty of turning the steering wheel as well as the strength of the wheel when starting ('crank back' effect). This fuel in the ball could create overheating and thus become dangerous and explode.
Like all tractors, the Lanz had some drawbacks: the start was quite binding, stiff controls, there were large vibrations and obvious discomfort on this type of tractors. Need to change the engine oil if the tractor remained stationary for more than 2 days, which resulted in a cost.
Hot balls engines are therefore launched and success will be more than to go, because this system will become the emblem of Lanz and will make his international renown point often copied.